Something Wicked started life as a long short story in the mid-noughties.. It was originally written for the women’s magazine market but never found a home because most short stories in these magazines are about 2,000 words long and this story was double that. But I never throw anything away, so it sat on a shelf while I concentrated on my novels.

Then in the summer of 2014, I thought about writing a seasonal story. I didn’t want to write a Christmas story but I did want to write about snow and I remembered Something Wicked.

The original title was The Witch of Buckley and it was about a couple experiencing problems in their marriage and taking over a coffee shop named Raven’s Cottage. Almost as soon as they moved in, strange things began to happen. When I rewrote the story I changed the title and the characters names; I think they were originally called Jack and Sarah. As the story grew longer I was able to add more characters, including Mister Snuggles the cat, who I think is now my favourite animal character!

The basic story and the various scenes within it remained more or less the same, but I changed some characters’ motivation and made the good guys bad and vice versa.

Something Wicked is similar in style to Breathless. Matthew Elliott, the highwayman from that book, makes an appearance here too, along with his partner-in-crime, Jacob Lewis. If you have read A Girl’s Best Friend, you might remember that Josh Stortford had two dogs, Elliott and Lewis, and I had the idea that Josh might have named them after these notorious highwaymen.

The witch in Something Wicked is mentioned in Trust Me I Lie - and you’ll also meet two of Matthew  Elliott’s descendants!

How my love of snow influenced

the inspiration for Raven’s Cottage.

Music: Wings to the Mind:

How music inspires me

and influences my writing.

How I love using diaries

to tell a story 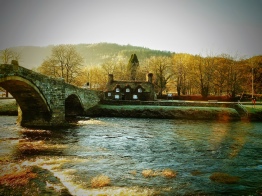